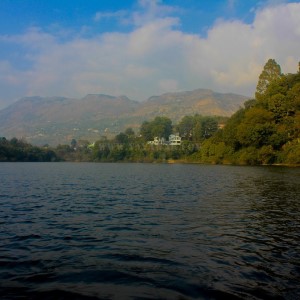 The time to meetup outside the KMVN TRH for the trek was decided last night for 0700 hrs. As per the same, I freshened up and came out and promptly, Hooda Saab was there, waiting for his family. Shortly, Dheeraj also came out. In the melee, Shikha also got up and came out just to meet everyone. And then Hooda Saab’s wife asked Shikha as to why she’s not coming along. She explained that she has trouble walking and develops ankle pain, plus we have our daughter also, who would need to be carried if we both go. We’ll manage, it’s not too tough, we’ll take turns to carry your daughter was the answer. After a bit of persuading, Shikha also got ready to trek. And of course accompanying us was my little kiddo.

So we 7 started the trek which starts just before the KMVN TRH. There is a nondescript small board on a tree trunk that reads way to Shree Shakti Hidimba Dham, however, since it is facing the traffic coming towards KMVN, we missed it and went further where the path to Purna Tal meets the road. Hooda Saab, who had been there earlier too, identified that this is wrong path and started calling his acquaintances to know the correct path. We started going back towards the KMVN TRH when we noticed the small board and finally took the trail. Now this trail is not a normal one on a flat surface. Actually you’d be climbing up a mountain, albeit on a lower gradient which ranges from 15 to 45 degrees incline and is almost 1.5 kms with loose soil and gravel. We took turns carrying my daughter and it was Hooda Saab’s son who was the clear winner in the race, marching far ahead of us. And another one’s turn Trying to capture a bird, blinded by sunlight A look towards Sattal from the height

Sattal (translated in English: Seven Lakes) and area around is famous birdwatcher’s paradise. Because of the ecosystem created by the green mountains, shrubs and the seven lakes, namely Ram Tal, Sita Tal, Laxman Tal, Purna Tal, Garud Tal (also called Panna Tal), Nal-Damayanti Tal and Sukha Tal (also called Khurdariya Tal) which are said to be interconnected (although I could see that Purna Tal has shrink-ed and not anymore connected), hundreds of varieties of birds inhibit the place in season. We were able to hear the birds chirping and spotted a couple of them, however, couldn’t capture them as either I was carrying the kiddo or the sun was directly peeking into my camera lenses. Instead, I clicked these… Flower in the jungle Huffing and puffing, we somehow managed to reach the gates of the Vankhandi Ashram and believe me, it was lot of relief, just having a look at the cemented paved stairs! 🙂 What was supposed to be just 40 minutes’ trek at the max, too us nearly 1.5 hours to complete. Having washed our hands and shoes undone, we climbed up the stairs of the Hidibma dham and we were immediately welcomed by a baba, known as Aloo Baba with a prasad comprising of piping hot Jeera-Aloo, a Banana and hot tea! It was out of the world taste – OK, may be because we were too exhausted by the trek and would have gorged on anything eatable. 😀 Aloo Baba – Notice the camaraderie between the dog and the kittens

Aloo Baba is the one who has set up this entire Vankhandi Ashram and Hidimba Dham. It is said that he had been working for Indian Army, but then decided to do something for the nature, being destroyed by the foreign variety of trees like Pine & Poplar being propagated widely. Baba enlightened that these foreign varieties need more water to grow and thereby they suck the ground water, thereby causing erosion of the mountains and these are the main reason that the mountains have started to die. Babaji has planted over 500 varieties of local trees over the mountain and even the Government has appreciated his efforts.

Intresting things that you notice at the Vankhandi Ashram – the Aloo-Jeera is said to be never short in supply, whatever may be the count of people visiting the ashram. What I also saw was a dog and two kittens, completely at peace and in fact enjoying the company of each other. The Ashram, situated on the top, also gives a good view towards Nainital town. Having spent some time there, we decided to descend down. This time, Dheeraj carried my little daughter and I was supporting Shikha all the time since she’s always wary of loosing balance and falling down on the descent. Gradually, we climbed down, picking up and collecting some pine cones for souvenir. By the time we reached KMVN TRH, Dheeraj had already bathed and was having his breakfast. We also quickly had our bath and ate our breakfast. And then we decided to visit the various lakes around – Bhimtal first. Hooda Saab has also given the contact details of one of his friend who runs a heritage property at Mallital, a bit far away from main crowd of Nainital. We had now two options for the night – Mallital and of course camps at Pangot.

After a short drive, we arrived at Bhimtal, however, the place has commercialized much and then the influx of tourists during the daytime made it a crowded place. We decided to skip and reach Naukuchiatal instead which is just 5 kms away. Now when you are with your family, at times you have to indulge in some touristy acts and hence a unanimous decision from respective Headquarters was to go for the boating. The rates were 250 for half an hour and so we asked the boatman if we could enjoy the ride for full hour and he agreed for 500 INR. The boatman enlightened us with his mix of facts and fiction – that Naukuchiatal means lake with 9 corners and if someone can view all the 9 corners from one place, he’s supposed to be very lucky and blessed. He also informs us that the lake is very similar to the map of India, if seen from a height (believe me, I checked Google maps and found some similarity if you assume certain things, but far from the map it appears as an inverted arrow-head!). Anyways, the ride was pleasant with cold wind blowing on face and it was interesting to hear the stories! 🙂 Naukuchiatal – some other corners Looking at the waters

Freed up from the ride, Dheeraj’s son spotted a horse, strategically placed to attracted customers and so off he went for a ride. In the meantime, Shikha noticed a Photographer’s shop who would get the clients clicked in ethnic attire customized as wrap-around/hook-ons with instant print. She wanted our daughter to be clicked in the attire and I couldn’t disagree. And the little kiddo enjoyed the dress and being clicked! And next was time for other ladies to indulge! 😀 The time read 1600 hrs. Is there any water in this?

Free from there, we wandered where to go – Pangot or Mallital. During the deliberations, it also came to my knowledge (albeit I don’t believe it.. he he) that Pangot has got bears in the woods and they smell kids easily from far away and since we were to stay in camps, it wasn’t too safe. While we were deliberating, Dheeraj came up with the idea why not we shall head back home as there was no point staying at Mallital – yet another lake that everyone has been multiple times. Shikha wasn’t quite agreeing to the idea as she had made up her mind for Pangot, however after some persuasion and a promise (not to be kept.. he he), she agreed to return.

It had to be a mad rush back home, trying to get as early as possible and since we wanted to get out of the hills before the darkness falls, we decided to skip our lunch and have something after we reach the plains. I enticed Shikha with the idea of having something at KFC too! 🙂

And so we started and this time, we took the shortcut via Bhimtal that would not require us to go via Jeolikote. By around 1800 hrs, we were at Haldwani/Kathgodam and the traffic had grown a bit. We stopped at Udupiwala and had something to eat so that we can drive non-stop to Noida/Delhi. Hunger satiated, we rushed towards Noida and in the rush, even while Dheeraj was signalling me to drive further and then take a right turn at Haldwani, I mistook his signals and turned in what was a one way road, though barely 200 mtrs. I realized it late and had nothing to say sorry to myself. The traffic continued till the city limits and then it was a breeze through Rampur and then taking a right turn on NH24 to Noida.

P.S.: We did stopped at KFC. I informed Dheeraj of the decision and asked him to proceed ahead as they would not be interested in non-veg food. Eating half a bucket and half kept for home, we drove back and reached home around midnight.

On the hindsight, rushing back home a day earlier gave us time to get some sleep and shrug off the tiredness to attend office the next day. 😀

I hope you enjoyed the nice little trip. If you have any question around the places, how to reach, where to stay, what to see etc, feel free to leave a comment and I’d try to answer it as soon as possible.

Driving Directions from Sattal/Bhimtal to Noida:  Traverse the route back to Country Inn, Bhimtal (check last post), taking extreme right when the Kutani-Sattal road meets the Bhowali-Bhimtal road to reach Country Inn. Drive ahead and pass by Bhimtal Petrol Pump. Just ahead, you have an option to take extreme right turn and go to Bhimtal through a shortcut, however, the road passes through congested market area, so it is better to avoid that road and drive further and just ahead of Paradise Hill Resort, take the right fork at next tri-junction to be on Kutani-Haldwani road which directly reaches Bhimtal.

From Bhimtal, to drive towards Noida/Delhi, take the right fork and drive along the Bhimtal to be on the Bhowali-Bhimtal-Haldwani Road. Keep on following the road until you arrive at a tri-junction and then take a extreme right turn on the right fork. Just ahead, take the left fork (you may take the right one as well, which goes around the HMT factory and joins back the same road. Further at the tri-junction (this is where the road we missed while going towards Mukteshwar), take extreme left to go towards Haldwani. Drive straight ahead and reach Udupiwala on your right. Keep straight and pass by Kathgodam Railway station and further ahead the Haldwani Stadium. You might see a marker to Delhi just ahead, but that is for oncoming traffic and supposed to be one-way. Drive a little ahead to pass by Pankaj Mall and then take right turn on Rampur road. Keep straight on the road to pass by Tanda Range forest and further Rudrapur. Keep on the straight road to pass by Bilaspur and then Rampur. At Rampur, take a right turn at the T-point on NH24. Drive straight ahead following NH24 and signages to take Moradabad Bypass and driving further ahead, reach KFC to your left at Gajraula. Driving following NH24 straight, pass by Garhmukteshwar followed by Pilakhuwa (a handloom hub) and Ghaziabad. To reach Noida, take a right turn at sector 62 T-point or if you want to reach Delhi, continue following NH24 across the Yamuna to reach the Millenium Park.