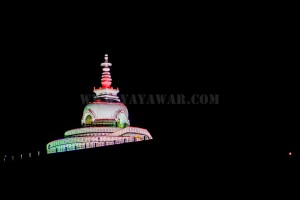 At around 0330 hrs, Tony wakes me up stating that he has heavy and unbearable headache and pain in the legs. He further says that probably it would be better for him to catch a flight to Delhi. I ask him to be patient and knock Cheena’s room as all the baggages were kept there and the medicines too. I hand over a combiflam to Tony and ask him to keep one handy to be taken around 0930 if the pain still persists. We go back to our room and I talk through Tony to calm and relax his mind so that he can sleep. Cheena says that he has heard that person hit by AMS shouldn’t sleep. What the hell! My own cure for any pain or ache is just a good 8-9 hours sleep and this should work for Tony too.

I assure Tony that if the pain and AMS doesn’t gets better by evening, I’ll get a flight ticket arranged for him. With the assurance with him, Tony goes to sleep. I advise everyone not to wake him up unless he himself is up.

We wake up leisurely as none of us had any interest to walk up to Polo Ground to see the processions. Tony also had an uneventful sleep, however, he says that he’s still feeling a bit heavy. No problem. We’ll just loiter around today with no agenda.

It had rained during the night and the caretaker is wiping the water off the floor. I start talking to him – Shyam Sunder is the name. Shyam Sunder is from Giridih in Jharkhand and comes every year to Leh to work in Hotels/Guest Houses. He’ll go back in November and then again come back in April. Mode? By train till Jammu and then shared taxis to Leh, which can take upto 5-6 days! He says that though the hotel owners are willing to provide ticket expenses, he doesn’t resorts to the same as otherwise he would be bound with a particular Hotel. So coming on his own gives him the freedom to work for any Hotel that pays him the most! Further, he tells me that most of the people working in Hotels and BRO are from Jharkhand, those in fields are from Nepal and those in shops are locals, so there is a division of work and nobody challenges the status quo thus maintaining their peace and livelihood.

Shyam Sunder gives me some information about Jorchung – that Sonam himself works with the DC office! What?? Had we known, we could have asked him for the permits. But then we might not have got the permits for Turtuk, Chusul & Tsaga La. He also informs that Sonam’s Sis-in-Law is working at the Leh Airport. Cool!! If required, we can ask Sonam to arrange for the tickets.

I got down and asked for Sonam, discussed with him that we need to stay for today too and most probably we will be leaving tomorros. I also inform him that if required, we will entail the services of his Sis-in-Law to get the tickets for Tony. Apparently, lot many visitors via HVK were supposed to come today and Sonam said that he’ll have to see if he could find a room in Jorchung, otherwise he’ll arrange for us in another hotel. Half an hour later, he informed that one room is getting vacated and we just need to shift there. Phew! We’ll not have to go anywhere else.

So we complete our breakfast and come up to our rooms. We pluck some apricots and apples from the branches hanging just outside the room window, and try some snaps. Close up of a bunch Kids passing by, in the backlanes That’s a reflection in the window-pane! Vistas from the room

Just when we’re back to Jorchung, Cheena receives a call. The call was from one of his friends who incidently at Leh and leaving tomorrow. So while Cheena goes to meet her, we go back to slumber.

Around 1900, Avi wakes me up stating that Cheena has come back with his friend and I should meet her. So we meet. She’s working with INTAC on archeology and had been excavating a Gompa which was buried in landslide. The work is finished now and they’ll be going back to Delhi tomorrow. Cheena tells us that he, Avi and his friend had already been to the Shanti Stupa and in fact they came earlier too around 1600, but I was fast asleep.

Some more pics of Shanti Stupa from their visit: The birth – folklore states that Buddha walked 7 steps just after being born and at every step, a lotus flower bloomed Dhamma-Chakra
She’s staying near the German Bakery, so we walk towards her hotel to drop her as well as loiter around in the market. The walk had another objective too – we need to purchase some onions and bell pepper for the maggi’s that we have. Since tomorrow onwards we would not be returning to Leh or any decent town, we should procure them here itself. So we drop her to her hotel and go to market. After strolling the entire market, we couldn’t find onions. On a shop where we procured the bell peppers, the Kashmiri shopkeeper explained that since the supplies come via Jammu-Srinagar route, no trucks have reached Leh in last couple of days (bandh & curfew to blame again) and hence the onions would not be available for couple of more days.

We cross through Datun Sahib ji Gurudwara and walk back to our hotel. The Shanti Stupa is looking very attractive in the lighting that has been done. Cheena dashes out again to click some pic. We have our dinner and then I ask Tony the long awaited question – How is he feeling? Perfectly fine!!!

Peacefully, we go to sleep for tomorrow is a long drive ahead which is manned by the K-Top. 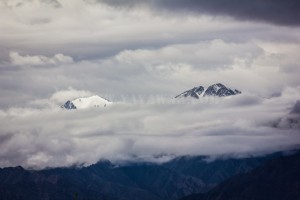 Although this was a day primarily for permits, we still got up early around 0600. After freshening up, we hopped on the hotel roof to see what it offers. Whoa! Amazing!!