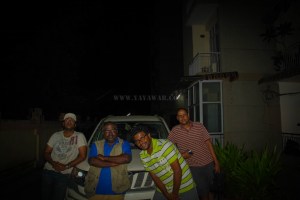 By 0000 hrs, we were at HP-Punjab border. Driving further ahead, we stopped at the Chandigarh – Zirakpur McDonald’s for some food. Remember we barely ate something at the Mayur Dhaba, Sundernagar due to pathetic taste and the last fulsome meal that we had was at Batal. So we stop and have some burgers and then rolls as well (of course chicken!). The time reads 0030 hrs.

Having fulfilled the craving for eating, we zipped ahead towards Delhi with Cheena and Avi taking turns to drive all the way and by the time the watch reads 0430 hrs, we reach Dwarka.

Look at the tiredness in Cheena’s eyes. Finally, the trip had come to an end for some, but I have to go to Noida and still some traveling is involved. But before that, it’s time for the last photo of the trip. One last photo of the trip

Cheena calls a taxi for me which arrives in couple of minutes. I transfer my luggage, as much as I remember, collect all the memory cards and hop on to the taxi, giving the Noida address and slumber into sleep. around 0515 hrs, I’m at my residence at Noida and the total taxi bill is 1240 INR for 40 km of travel!! It reads of night charges, toll and what not, but I’m in no mood to argue as reaching back to home itself after 18 days  and getting to meet wifey and li’l daughter seems to be a good refreshing feeling.

I take a royal bath – taken after 4 days. Last we had a bath was at the Chandratal. And then I inform office that I’d not be coming as I’m feeling too tired. I try to sleep, but then remember that Tony may be coming by evening to collect his memory cards and so start card aggregation and clearing. Couple of hours later, I slumber on the bed, exhausted, to wake up late evening!

Tomorrow is Janmashtami holiday at office, so I can further indulge in pics aggregation and catching up with sleep. However, the pics are a mammoth task – there are 13,000+ pics & vids plus raw – total size 278 GB, still some 200+ pics missing as they are in various phones and will have to get them too.

FINALLY AT HOME – END OF A MARVELOUS EXPERIENCE!!! 🙂

I join office and go back to the grind on 29th August – on 21st day since we started our trip.

Driving Directions from HP-Punjab border to Noida (via Dwarka): From the HP-Punjab border, drive straight on the NH to arrive at Kiratpur sahib. At Kiratpur Sahib, do not take the flyover, rather turn left to be on the NH 3 and then drive on the same road passing by Bhartagarh followed by Ghanauli, Malikpur, Rupnagar (or Ropar), Kurali and then Kharar at Chandigarh outskirts. Turn left at Kharar to go towards Chandigarh, the straight/right fork goes to meet NH1 at Shambhu Barrier after Banur and reaches the outskirts of Ambala. One you’ve taken the left turn at Kharar, follow the signages to go towards Delhi and remain on NH3. Pass by sector 39 to 47 and then take left at sector 47C where the jagatpura bypass road meets NH3 and pass by sector 31. Take right from the next roundabout to remain on NH3 and reach Zirakpur, from where the straight road is known as Chandigarh-Ambala expressway (also known as NH22). Take left/straight at the tri-junction and after couple of minutes, arrive at McDonald’s and KFC to your right, just ahead of the Decathlon store. Keep on straight and pass by Dera Bassi and take the right fork to remain on the expressway. Drive straight ahead to join NH1 at  Ambala and thereon keep following NH1 towards Delhi passing by Kurukshetra, followed by Karnal, Panipat, Samalakha, Gannaur, Sonepat and reach Singhu border near Alipur village. Drive ahead and take the clover at Mukarba Chowk (interestingly, Mukarba is a violated form of Maqbara) to turn right and be on the outer ring road. Pass by Pitampura, Peeragarhi, Janakpuri and take the straight road under Dabri more flyover. Take the Nallah road and reach Dwarka sector 5 and then right then left and then right at the intersections to reach Sector 12. From sector 12, drive straight towards Sector 10 and turn left on the road between sector 6 and 7 to go towards sector 1. At the next intersection at sector 1, turn right to take the Dwarka flyover and pass by domestic airport (palam road) to reach NH8. Do not take the flyover on NH8 and rather take the right turn beneath it to be on Rao Tula Ram marg to pass by R. K. Puram and then turn right on the ring road. Keep on the ring road to pass by Bhikaji Cama Place (marked by Hyatt hotel), then AIIMS, South Ex, Moolchand, Lajpat Nagar and then Maharani Bagh. Keep on straight/right at the fork to be on the DND flyway to Noida and take the second exit after the toll booth to pass by Filmcity. Just after filmcity, turn left before the flyover to go towards Sector 18/TGIP Mall. Take the underpass and pass by Vishwa Bharti Public School (sector 29), DPS (sector 30), Nithari market (sector 31), Wave city centre (sector 32), ISKON Temple (sector 33). At the next intersection, take right so that you pass by CNG filling station to your left, followed by market and then Indian Coast Guard residential apartments. Just besides the coast guard society, the Gate no 1 of Sector 52 is located, take left to enter the gate and drive straight. At the second intersection, take right and arrive at Aravali Apartment gates in 50 meters.