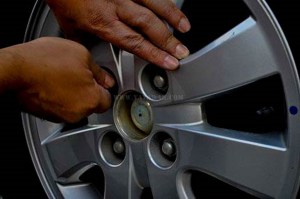 At the break of the dawn, I wake up at the noise of some commotion at Chandra dhaba. Someone is shouting at the top of his voice. I realize – this is Jamaica’s voice!! Oh yes! Today is Jamaica’s birthday – a fact that he mentioned when we met him at the tri-junction when we were trekking towards Chandra Dhaba at Batal after our car broke down. Immediately, I do down to the dhaba and hug Jamaica and wish him. He’s too ecstatic and ordering whatever is available for everyone. We too get a can of Tuna! 🙂

Jamaica is going to Kaza for celebrating his birthday and the first reaction after seeing us still there is that we should have better stayed that day with him and probably all this wouldn’t have happened. But we don’t have a time machine at our disposal and so can’t go back in time. And so we keep waiting for the call from Mahindra.

Around 1100 hrs, we receive a call from Mahindra and they tell us that there is a landslide at Malling and so sending a rescue vehicle from Reckong Peo wouldn’t be possible – Breaking new, eh! We were telling him the same yesterday and he would not agree to it. He has wasted another day. He says that now he will be sending someone from Mandi and will confirm during the day once the rescue vehicle starts.

We know it would take time. Getting a tow truck from Mandi means it would not come before tomorrow. Why not try our luck with unscrewing the tyre and if we’re successful, we’ll let Mahindra know.

And so the efforts start again… trying to fit spanners from various vehicles passing. The problem is.. most of the SUVs are fitted with 19 numbered nuts, trucks have larger ones and none of the vehicle has the 21 numbered nuts and hence no appropriate spanner! 🙁 The expression says it all… Couple of hours later, a gentleman from Lucknow arrives at the chandra dhaba, going towards Chandratal. He has got a toolbox and seeing us in problem, he assures us all help. So everyone gets on the job. This seems to be working! We are able to unscrew three nuts!! Another nut has lost it’s groove, so it is the 20 numbered spanner and hammer that makes it fit, and viola! The forth nut is also unbolt! Yay! I think we are going home shortly! 🙂 Many thanks to the gentleman!

With our yesterday’s endeavour to cut the nut open with a chisel, the fifth nut has lost all it’s groove and there is nothing on which a spanner would fit. The only way is to cut it open. So the gentleman goes on his journey and we start thinking a way to cut the nut.

Why not we move the vehicle a bit? A single nut won’t stand much chance and it would automatically give way by the wobble of the wheel. Is it? No! This nut won’t budge even a micro-milli-meter!! It seems that while the vehicle was being driven on rim from the spot of puncture to the Chandra dhaba, the heat generated caused the alloy to melt a bit and it is now stuck badly. We try hammering, but it doesn’t even causes the wheel to budge!

Cut the bloody rim itself. This has already distorted and rendered useless anyway. Let’s cut it. The hex saw blade again to the job, we start cutting the rim itself. One spoke cut and then we notice that it isn’t possible to cut the part of rim that is around the axle.. it needs some space and there is none! Ruled out!! 🙁

Hammer it out, the rim is already useless.. whatever use it had, had been put out of the job by cutting the spoke. Couple of hammers from the outside and it doesn’t works. No! We have to take it outside, so the hammering should be done from the inner side of the wheel. But there is no space! The brake assembly is blocking. Let’s get down the brake assembly too. It would create some space for hammering. However, no one knows how to take it down. And once taken down, how would it be put back on? And if not, there is no point driving in the hills with no roads, without brake!

So we give up on everything else and keep on trying cutting the nut. Is that easy? Not at all! Still we cut 3/4th of the nut. However, the last 1/4th is nightmarish! We don’t have tools of the trade! Had there been a welding machine – even a gas welding one, this was a 2 minute job. However, we can’t expect to find anything for at least 120 kms either way – Kaza or Manali). So we keep trying. The job is made difficult by the typical setting of the nut into the grooves. See how the nuts fit in!

Considering that the nut itself goes into a cylindrical space in the rim which further tapers.. the nuts are also such that one quarter of the nut is tapered towards the end, and this tapered end goes into a groove where nothing else can reach. So no chisel would work and now that hammering etc everything has failed, we don’t have any other option than to wait for Mahindra to rescue us. The tapered part which resulted in all this

Having resigned to the fact, we rest in the dhaba after lunch. Mahindra ASS is not providing any details of any vehicle coming. They say that they are trying to arrange, but no one is ready to come to chandra dhaba at Batal citing bad roads. Our place for 4 nights In the meanwhile, we see a group of 15-20 trekkers coming in to the Chandra Dhaba. This is a group of Israelite tourists who have hiked onto some peak nearby. We see two ladies, supporting a lady to walk and then gradually come in the dhaba. The lady is shivering and has severe headache. She’s not willing to eat or drink anyting. Clear case of AMS. I talk to Dawa Tashi and ask him to check if she requires any medication. Initially, they do not accept the offer. I again ask Dawa to tell them that the lady needs immediate re-hydration else there are very fair chances of her collapsing here itself and hence it is very important that she be rescued to Manali as soon as possible. This time they pay attention and talk to their medic who is traveling with them. The two ladies come and ask for the list of medicines that I have. I provide them with the list which has medicine names as well as indicative usage. I give them the ORS sachets and ask them to mix it in water and give her to drink. The medic requests for disprin. I hand over two strips of disprin to him, with a warning that this shouldn’t be administered unless she feels better as this is symptomatic cure only and her’s is no simple headache, rather AMS and she needs to be rescued asap.

They arrange for a vehicle and two of the group get ready to accompany her to Manali. In the meantime, the lady has been sipping the ORS solution and the results are quick. She’s feeling better and in fact walks out to the vehicle with only little help. The group says Thanks to us, which appears to be dry, but may be this is how they interact, after-all we are Indians and we have too much of warmth amongst us. 🙂

We keep pestering the Mahindra ASS without any luck. We realise that we may be stuck here for couple of more days and by the plan, we should have been home now. So we use the phone at the Chandra dhaba to communicate to our families and explain the situation and also that it may be a couple of more days that we’d be back. However, we are perfectly fine – Chacha and Chachi have ensured that we remain happy. Kudos to them as I don’t see any signs of worry or fatigue. We also keep on interacting with people visiting the Chandra dhaba –  army people on mission. Finally, late evening, the Mahindra ASS confirms that they have been able to send one tow truck and he shall reach us tomorrow morning.

Elated, we have our dinner and go to sleep. 🙂

Next: The rescue vehicle arrives – who’ll rescue it?