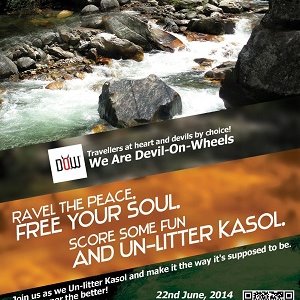 Kasol is known as mini-Israel of India, owing to large aggregation of tourists from Israel who spend months on months there, soaking in the nature and inhaling & ingesting (you know what Kasol, Tosh and Malana are famous for). In May 2014, Doulos Jose (or DJ, who writes at mindblogging @ my will: a plethora of thoughts) along with few friends visited to Kasol, and they were appalled by the situation of non-biodegradable waste, being dumped directly into the Parvati River which originates just 58 Kms away from Man Talai Glacier below the Pin-Parvati pass. He discussed with us at Devil On Wheels (DoW) and this was when we – members of DoW – decided to do something and got into organizing a campaign. A WhatsApp group was formed and discussion and planning started taking place. The date for the event was fixed for 22nd June and necessary preparations started. DJ’s friend (Rashi & Shilpa) volunteered to design the posters and they came up with nifty catch lines and appealing posters. Aashish volunteered to do a recce a week before by visiting. He also intended to put up the posters and mobilize local support for the event. So over the weekend, he reached Kasol and met Om Negi, the camp operator at Chalal. Om helped him put posters everywhere and connect to the locals. Aashish – all set to do a recce We were really appalled by the pics that Aashish shared – of the garbage dumped everywhere and it made our resolution very strong. Aashish, with the help of Om was able to connect to the local Pradhan, who assured all his support and said that he’ll be there personally and arrange for sweepers to be present on the day of the event. Garbage being dumped in pristine streams Ashish also shared a map, pic of which he has taken, to identify areas… The event on Facebook and DoW solicited a very good response with over 70 persons giving their consent to join the drive. However, when we actually reached the D-0 day, we came to a firm understanding that over 60% of those won’t be joining for one reason or the other which boiled down the numbers to between 20 and 30 people. However, with firm resolution, we decided to go ahead and give it a shot. A list was made for the required tools/items and the same were procured by Dheeraj’s father. I was keen to club Tirthan valley or Barot visit along with the Kasol and had planned it like:

I discussed my plan with Sany who was also keen to visit Tirhtan and so we zeroed on Tirthan valley. I tried Raju Bharti (River side resort) at Tirthan who said that they were booked till October. I then tried Himalayan Trout House – they also were booked. Then I contacted less favoured Khem Bharti and he confirmed that accommodation was available. It was planned that Sany (and his wife) will travel with me (plus my wife and kiddo) in my Scorpio.

So the night before, Sany came to our house in his vehicle. The luggage was all prepared for both the families, ready to be loaded in the morning. We spent major part of the night chit-chatting and then realizing that we have to start early morning, I went to sleep while Sany preferred surfing TV channels for some more time and eventually couldn’t sleep because of my loud snores! 😀

Next: Noida to Kasol / Chalal