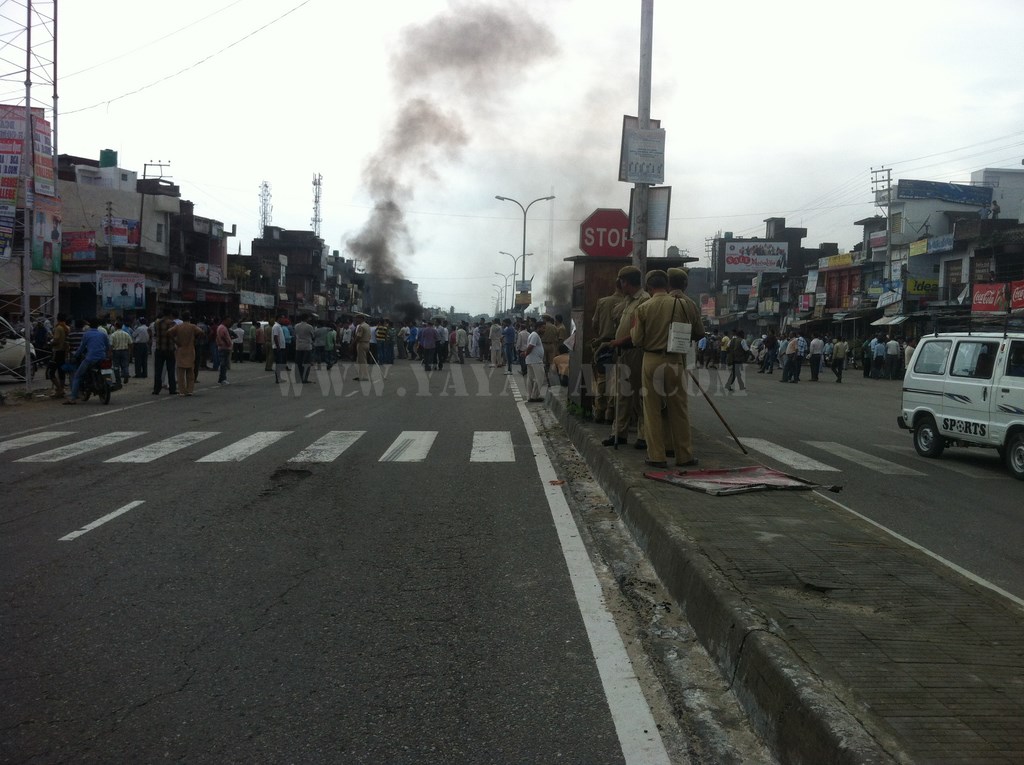 Stopped at McD, Doraha for some McEgg Burger and coffee at 0255. As the daybreak was about to happen, our stuffed stomach demanded to be emptied. Next stop was at McD, Phagwara where we freshened up and then had some Ice creams. After Phagwara, we drove continuous to reach J&K Border, Lakhanpur at 0900 hrs. There had been heavy rains last night and the road was witness to it with many small landslides and puddle across the road. Further to Samba, at 1000, just when we reached Vijaypur, traffic was at complete halt and we encounter the first problem of the trip – we notice this: Further about 200mtrs ahead, heavy smoke was enmating as tyres were being burnt on the road, completely blocking it. On enquiring, we learnt that Hindus all over in Jammu valley are protesting and agitating against the firing by Pakistani troops in which 5 Indian troops were killed. To complicate the matter worse, there had been communal violance at Kishtwar and shops and establishments of Hindus were burnt, government establishments were fired upon and there were rumuors of two people getting killed. In retaliation, BJP and Hindu groups had called for a 2-day bandh in the valley. The heavy deployment of the riot police was no deterrent to the agitators and in fact the police were advising vehicles to go back! We waited for a while in anticipation that the crowd will disperse. After stopping for over 1 hour, we decided to take the Sambha-Udhampur route and went back to Sambha. The police personnels also advised taking the Udhampur route, however, just after 100mtrs, a sentry stopped us and directed not to go towards Udhampur as the route was clogged with demonstrations.

HVK communicated that the roadblocks and bandh were Jammu valley wide, however, he also informed that this would be more of a nuisance in Jammu and once we’re through on to the Mughal Road, there was no problem as in fact one of his known person – Rohit right now was on Mughal Road. He also informed that yesterday there were some landslides on the Mughal Road, but most likely they were clear now, with the major landslide happening at Bhamla.

Had our lunch at a dhaba at Sambha and then decided to go back again to Vijaypur. What we noted that the protestors were allowing “Yatra” vehicles, those going for Amarnath (probably) to pass through and stopping every other vehicle. We also decided that we would pass on the same pretext. After waiting for about half an hour, we passed through the agitating crowd around 1230 hrs. Some politician was giving a heated speech. Further, we came across many such burnt tyres, but the agitators were absent. Perhaps the leader finished his speech there and the work was finished. Thereafter, the drive into Jammu city was uneventful.

We took the road to Akhnoor to get on to the Mughal Road. And then the nightmarish drive started again. At every settlement around the road, there were people agitating with burnt tyres and everywhere we had to give this excuse that we were going for the “Yatra”. The vistas, in the meanwhile changed colour to lush green. We tried to enjoy the views, but the mind was getting anxious at every nook and corner. Whenever we saw a couple of people or some smoke in distance, we would jump in our seat – there is another roadblock!! As updated by HVK, at Bhamla, there had been a major landslide which was cleared only about 0900 hrs for one vehicle to pass at a time. Further drive till Sundarbani was beautiful! We reached Sunderbani at around 1530hrs and just after Sunderbani and before Naushera BP when we were to take a right turn towards Rajouri, a huge gathering of agitators blocked the way, with some of them jumping over the bonnet and having sticks and rods in hand. They individually asked the name of each of us. We passed the same excuse that we were going for “Yatra”, but this time they would not hear it. They said that if we were going to Baltal for Amarnath yatra, we should go back to Jammu and take NH1 to Srinagar. Apparantly, there is a “Boodha Amarnath” somewhere on this road and till this time, everyone thought that we were going there. The agitators and even the police personnels advised against taking the road further and go back to Jammu as apparantly the area ahead was Muslim dominated and they’d burn our vehicle and kill us. Seeing no way to go, we had to turn back to Jammu. Talked to HVK and he informed that Rohit has been able to cross the Mughal Road, however, now there was some disturbance at Rajauri. On way back to Jammu, again found the agitators and explained them that we are returning. On the outskirts of the city, had to ask for directions and a gentleman on scooter was so helpful that he showed us the way by driving upto 3-4 kms. Reached Jammu around 1755 hrs and checked in Hotel Vivek. All this while, we forgot to take out the DSLRs to capture the vistas and it was a nerve-wreking day for us in totality. Since everyone was tired by a continuous journey of about 19 hrs, we decided to stay for the night and start early morning around 0400hrs to beat the agitators as the bandh call was extended for another 48 hrs. Were glued to the TV and were glad that we didn’t went to Rajauri as a curfew had been imposed in the afternoon following some communal clashes. Had our dinner early and retired to bed.

Driving Directions from Murthal to Jammu: Drive on NH1 to cross Panipat, Karnal & Kurukshetra. After crossing Ambala city, take right on Banur road just before Shambhu barrier. Continue on the road to pass by Mohali sector 105 and reach Kharar. From Kharar, it is NH21 passing by Kurali and reaching Ropar (Rupnagar). At Ropar, take the left exit towards Hoshiyarpur on NH24 crossing over the Satluj bridge (The right exit on the flyover takes you to Kiratpur). Drive on NH24 past Hoshiyarpur and join on NH1A from Dasuya. From Dasuya, keep left to remain on NH1A and cross Beas river before Mirthal. Cross Chakki river just before entering Pathankot. After crossing Pathankot city, turn Right at Malikpur to remain at NH1A. Cross Ravi river and reach J&K toll post at Lakhanpur. Keep driving on NH1A and pass by Kathua and then Vijaypur finally reaching Jammu.

The plan we had, we had to take the Mughal road. To take that road, turn left after crossing Tavi river on Talab Tillo road and further drive on to Canal road. Keep on this road to cross Chenab river and reach Akhnoor. After you cross Punjab National bank to your right, take the right fork of the road to pass by Hanuman Chowk. Hill driving starts from Nardi. Keep on driving without taking any left or right cut on the road to pass by Sunderbani and reach Siot. From Siot, we had to take the right fork to reach Rajauri where we were turned back by the agitators. We took the same route back to Jammu Bus stand where Hotel Vivek is located.