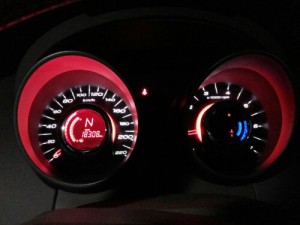 As per plan, started at 1400 from home at Noida. Dropped wifey and li’l daughter at Terminal D1 at 15:20 and bade bye (people still ask me how do I managed to do this!). Reached Dwarka Sector 12 by 1600 hrs where the Yayawars had to group. Called Tony and they just reached from their shopping spree at CP, Avi got a new shoe! A Wifey called at 18:30 to intimate that she has reached her hometown – Patna. Went to McD to have some burgers. Let me take this opportunity to introduce the Yayawars. From left to right, 1. Your’s Truely, 2. Cheena, 3. Tony, 4. Avi – a motley groupe with age ranging from 23 to 39 years! Youngest being Avi – an Mechanical Engineering student and the oldest being your’s truely – a typical IT guy with a hige tyre around the waiste

The rule was, the elders have to order and the order passed in a typical “sarkaari office” fashion to the youngest. So you know who ended up doing all the physical work. Also, whoever would do any mistake, it was the youngest who had to immediately say “Sorry!”.

After Cheena reached around 21:30, we started packing bags and loading them on the carrier. Everything was arranged as per HVK’s checklist, or so I was told (the checklist has an important part to play in the story, be tuned). The spare tyre occupied most of the space on the carrier and apart from that, only the gas cylinder, jerry cans, sleeping bags and tents were tied on the carrier. Rest of the lugguage had to be dumped in the last row, which seemed like a full family going on a 2 months trip. Within a group of 4 persons, we were carrying 8 cameras!! Started from Dwarka sharp at 23:45. The odometer reading was taken. The idea was to reach Jammu, take Mughal Road to Srinagar and reach as far as possible. No traffic on the way and soon we crossed the Singhu border. Stopped at Sukhdev dhaba, Murthal for emptying the ever-charging bladders and then proceeded forward.